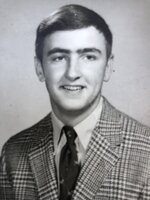 Gary Elroy Robertson, born July 16, 1953, from Richmond, Virginia, passed away peacefully on November 20, 2021 after a brief illness. Gary has been reunited with his parents Ira Bernard Robertson and Mildred Gary Robertson and his brother Bernard I. (Robb) Robertson. Gary is survived by his sister’s Linda R. Flournoy (Sammy), Brenda R. Craft and his brother Stephen L. Robertson (Lisa). He is also survived by his sister-in-law Vicky Williams Robertson and his four-legged baby Susie. He is also survived by several nieces, nephews and cousins. Gary graduated from George Wythe High School and loved to hang out with his family, enjoyed reading and doing what he could to help others. Gary worked in the finance field for the hotel industry for many years. The family would like to thank his minister Ms. Mylicia Markham for all the support she provided Gary for the past several years especially during his heart transplant three years ago. In lieu of flowers, donations can be made in Gary’s memory to Foundation of Truth Ministries P.O. Box 4753, Midlothian, VA 23112 or the SPCA 2519 Hermitage Rd, Richmond, VA 23220 A memorial will be held at a later date