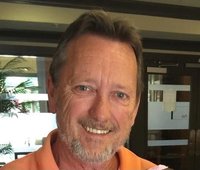 Terry Eugene Angle, 69, of Prince George County, VA went to be with his Lord and Savior on January 12, 2021. He was born on February 7, 1951 in Charleston, WV. Later, he moved to Hopewell, VA where he called home for 61 years. He was an Army Veteran. Terry worked at Nabisco for 21 years and retired in 2013. The legacy of pure love is what Terry will be remembered for most. He could command any room with his strong, deep voice yet he possessed the gentlest of souls. Terry’s passion was his love for Jesus and his family. He was an active member at Bethlehem Church for the last 10 years and prior to that worshipped at Gregory Memorial Church. He loved singing, being at the beach, golfing, and playing softball. He was an avid sports fan that loved to watch and cheer on the Cleveland Browns, the North Carolina Tarheels and Tiger Woods. He is proceeded in death by his parents, Eugene and Regina Angle and Thelma Newcomer. Terry is survived by his loving wife of 37 years, Betty Sue Angle; his children Tanya Williamson (Wayne) Tracy Jolly, Callie Angle, Chad Angle (Brittany) and Teri Blair Lucy (Justin); his twelve adoring grandchildren, Caleb and Micah Williamson, Haley and Sydney Jolly, Makayla Angle, Laci Lipford, Taylor Robbins, Jackson and Charley Angle, and Harper and Hampton Lucy; his three great grandchildren Adaline, Seth and Alaina Williamson. He is also survived by his siblings Jerry Angle, Linn Roach, Glenn Angle, Libby Blickley, Dora Holliday, Ray Angle, Mava Robertson, Jimmy Newcomer, and Kim Kelley. The family of Terry Angle wishes to extend their sincere thanks to everyone that has showed their love and support during these times. The family will have a private Memorial service and a Celebration of his life will be held at a later date.