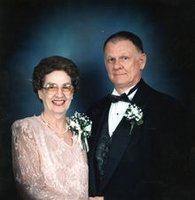 Davis Walker, 81, of Hopewell, passed away on Friday November 18, 2016. He was preceded in death by his parents Robert O. and Thelma Cain Walker, and his son Robert Duane Walker in 1967. Davis was a Prince George Police Officer and retired in 1991 after 24 years of service, he was also a Hopewell Police Officer for 5 years prior to joining the Prince George Police Department. He was a member of Enon Baptist Church since 1964. Davis is survived by his loving wife of 52 years Martha Garrett Walker, a son, Brent Walker (Laurie), a daughter, Melissa Walker Browder (Donny), a grandson, Tanner Walker Fine, and a sister Fannie Mae Gunn. The family will receive friends at Memorial Funeral Home in Hopewell on Tuesday November 22, 2016 from 6 PM to 8PM. Funeral services will be held in the funeral home chapel on Wednesday November 23, 2016 at 2:00 PM. Interment will follow in Appomattox Cemetery. In lieu of flowers memorial contributions may be made to Enon Baptist Church 13707 N. Enon Church Road Chester, Virginia 23836. Condolences may be registered at www.memorialfh.com